Day 8--Cyprus/Turkey in One Day 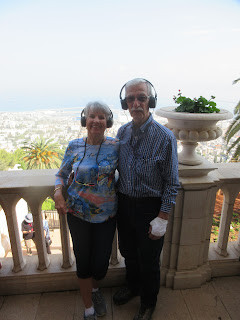 We left the ship at 8:40.  Today we had to carry our passports as we had to cross the border into Turkey.

Bill has his dressing on his hand changed every morning, so we leave breakfast and go directly to the infirmary.  We had to pass through the harbor security but all we needed to do was show our ship pass.

Once that was done our local guide met us and escorted us to the bus.  We are docked on the southern part of the country in Larnaka, Cyprus.

It took about 50 minutes to drive north to the capital, Lefkosia. Did I mention they drive on the other side of the road? This capital is the only one located in two countries.  We walked a short way to the border.  We showed our passports and then walked through the buffer zone which is controlled by the United Nations.  There was no where to go in the buffer zone other than stright ahead to another border control.  Once we cleared passport control there was a Turkish escort that stayed with us.  It was night and day difference in that short block.  Seemed like a third world country.  Cyprus was very modern and clean and Turkey was just the opposite. 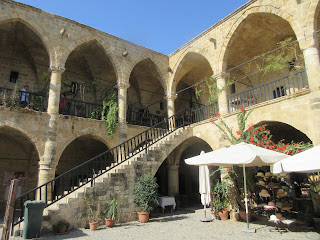 This was a very nice "caravan hotel" back in 1574 on the Turkie side.

We had some time on our own and I wanted to find a battery for our camera as I forgot to bring the charger. I did find a Christmas Ornament from Cyprus but all I could find from Turkey was a small flag for the travel Christmas tree.

We were told not to get anything to eat until we returned to the Cyprus section.

That's as far as I got on the blog.  Bill and I got home very early this morning.

I should have taken notes.  I do remember we had a lot going on and no time to even sit down at the computer.  We enjoyed one day at sea with a very busy schedule.  Members of the Sir Edmund Hillary club were invited to a cocktail party.  Harry and Dee just completed their 30th trip.  We have completed 16 trips, it's a shame I can't count the ones we signed up for that were cancelled.

We were told that 47 of the 74 passengers have all completed 3 or more trips.  The captain told us that they were paid during the pandemic.  No wonder they were so great.

I gained a pound and half.  I'm sure a lot of that is from sampling all the canapes.  They were all so pretty and different.  The waiters kept trying to encourage us to try all of them.

The farewell dinner, of course, offered lobster tail and baked alaska with some other alternatives. 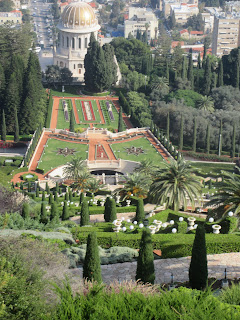 The following morning we disembarked the ship in Haifa.  Israel is very different than most countries.  They don't stamp your passport, they give you a stamp with your photo on it.

Our first stop was the Baha'i Gardens.  Once again it's difficult to describe.  Can you imagine cutting grass with sicissors? 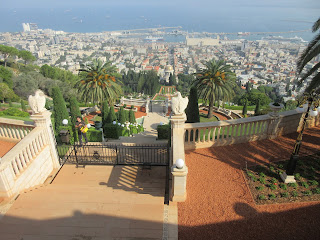 If you look closely you can see the ship in the harbor. 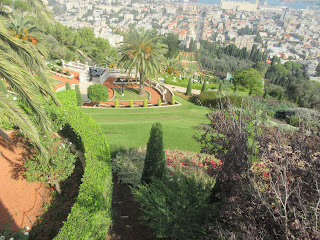 Here's another photo of the gardens.

From here we visited Caesarea.  I'll have to tell you about that in the next blog.

Posted by billandjanrvingtheusa.blogspot.com at 2:27 PM