The Secret is Out

Yesterday Gerri and John Beckman called and said they were coming into town and asked if we would  be home.  They wanted us to go out to dinner with them.  I was cleaning the kitchen drawers and had a huge mess, so I declined.  I ended up finishing the drawers in no time, and called them back and said we'd go.  I'm so glad we did.  We always enjoy visiting with John and Gerri and never run out of things to say.  We proved that last night with almost 6 hours of non stop talking except when we were filling our faces. 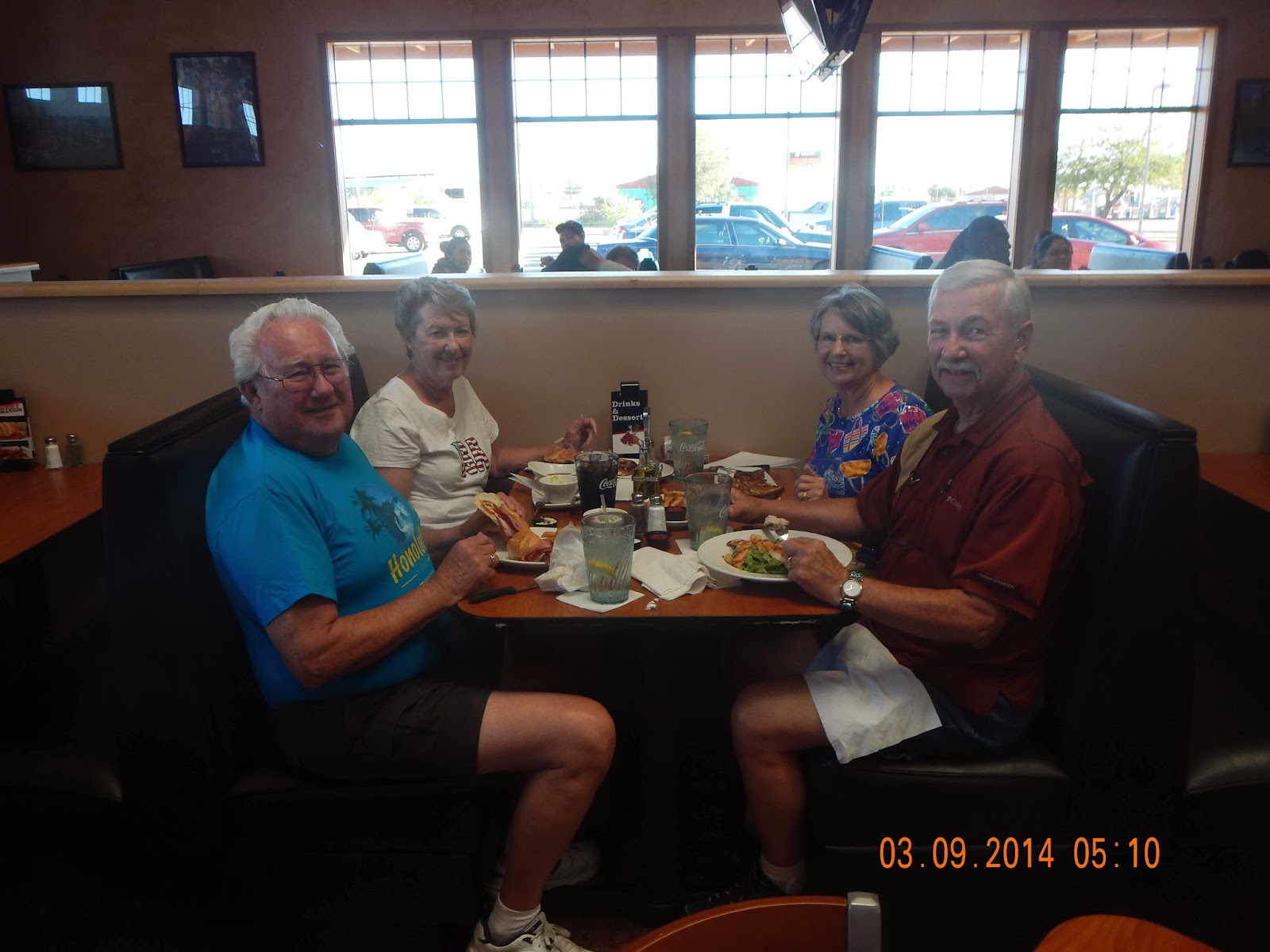 Sandie and Jim Dixon have been keeping a secret and they asked me not to say anything until the 10th.  Well today is the 10th and I have permission to tell you.  Sandie e-mailed me this morning and said she thought they'd be in Casa Grande around 1 pm.  We were anxious to see them but knew they had to go to Tucson before coming here.

She called us around 2 to say they were still in Tucson and would be here in a couple of hours.  They had to stop on Florence Blvd to pick up something they ordered to go with the surprise.  They had reservations at Casa Grande RV Park and Sandie called while Jim went in to register around 4:30.  We grabbed the camera and car keys and were there before they had it unhitched.

Here's there surprise.  Anyone that knows the Dixon's knows how much they've been wanting something small to explore the USA. 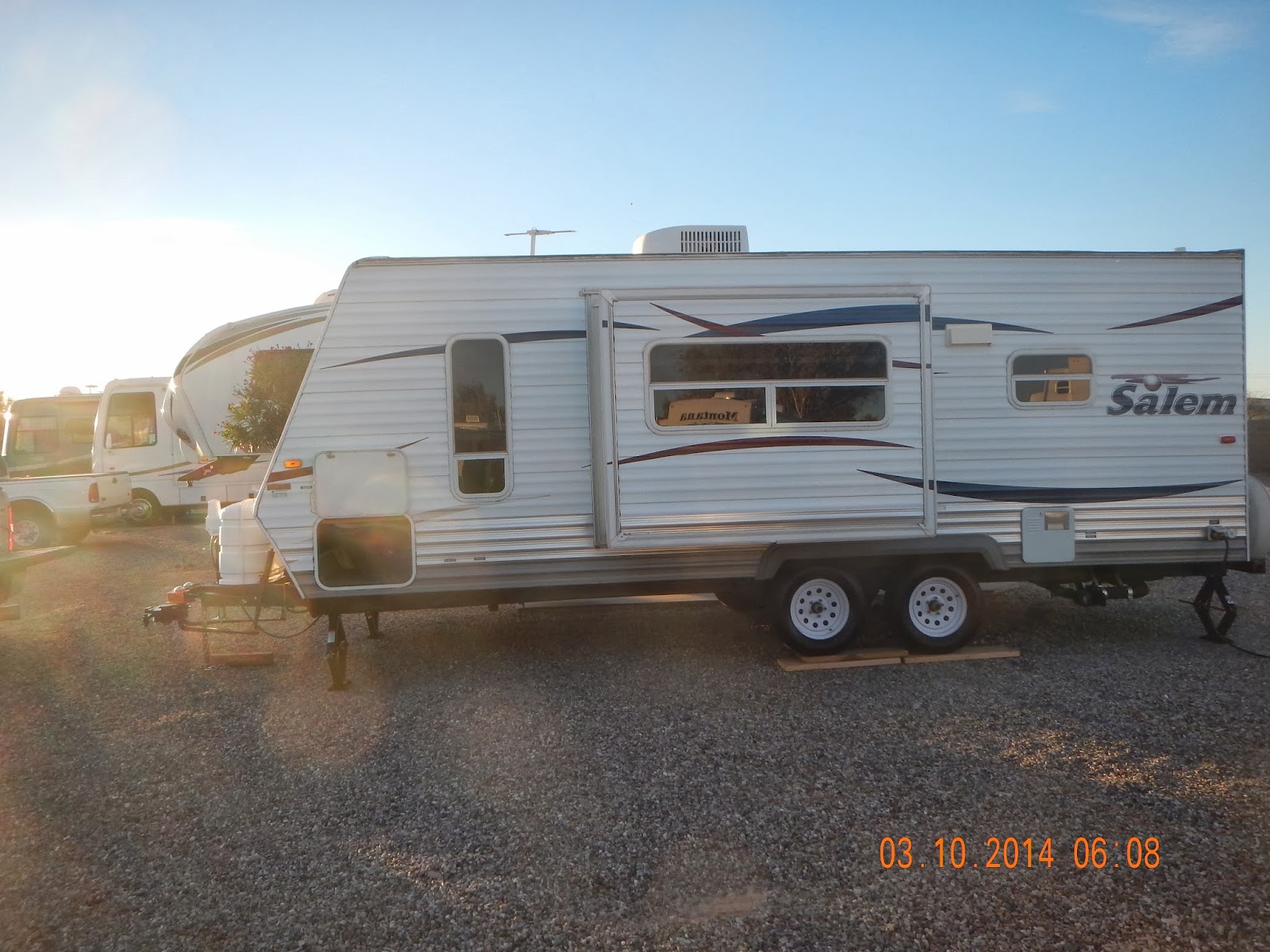 They found a great deal on a hardly used 23 foot travel trailer. 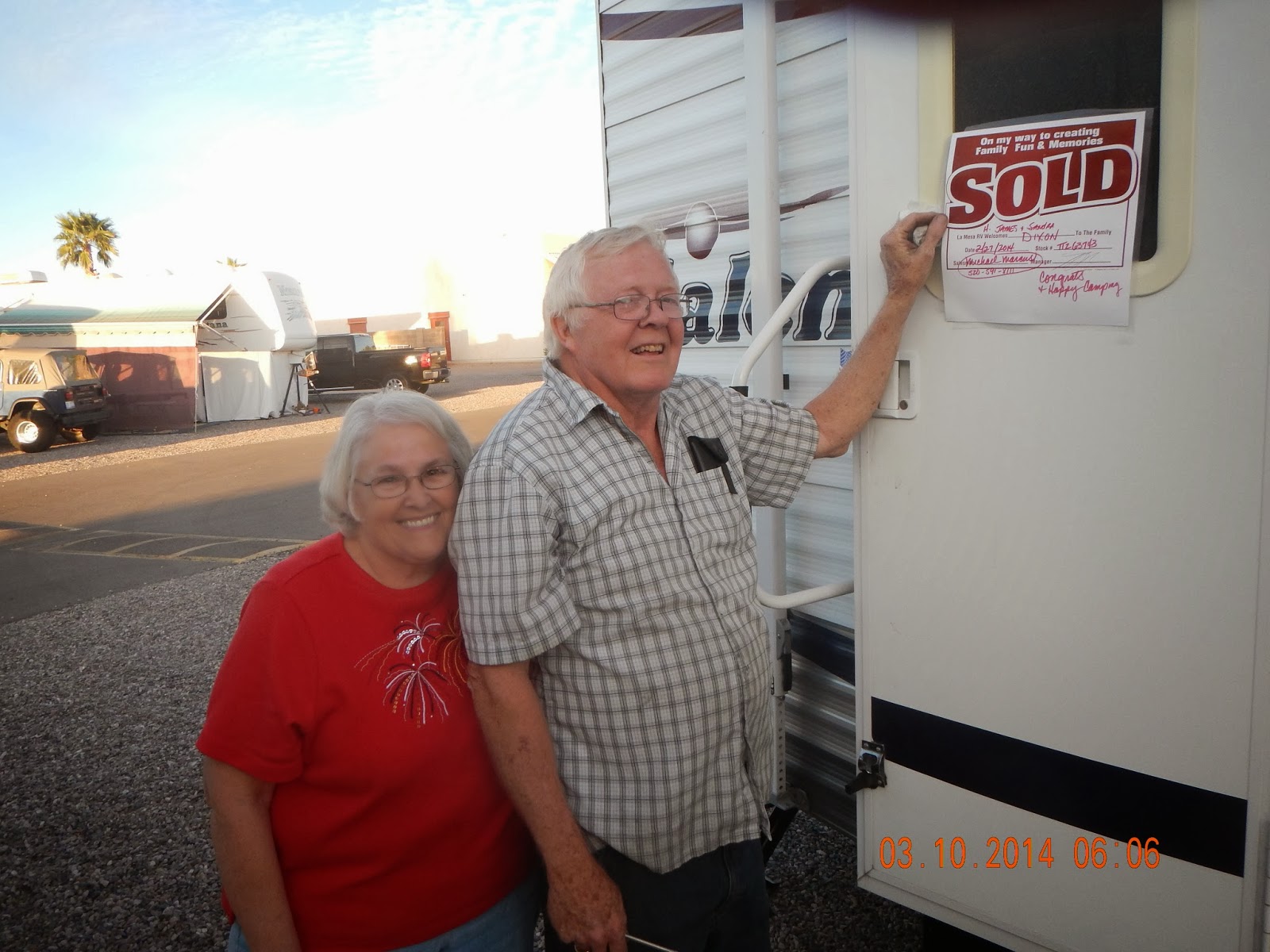 Jim said he got up at 4:45 am and they were suppose to have a 10 am appointment in Tucson but they were still cleaning it an hour and half later.  They did have a lunch provided but it still took a long time.

Bill and I unloaded the stuff for the trailer.  Jim and Sandie thought of everything.  She has a different size bed so she had a new mattress pad and sheets and matching linens for the bath.  She has a nice size bathtub. We can see why they were so excited.  We just carried most of the boxes into the trailer and left them.  We had them over to our house for dinner and when they left they both looked exhausted and said they'd unpack tomorrow. 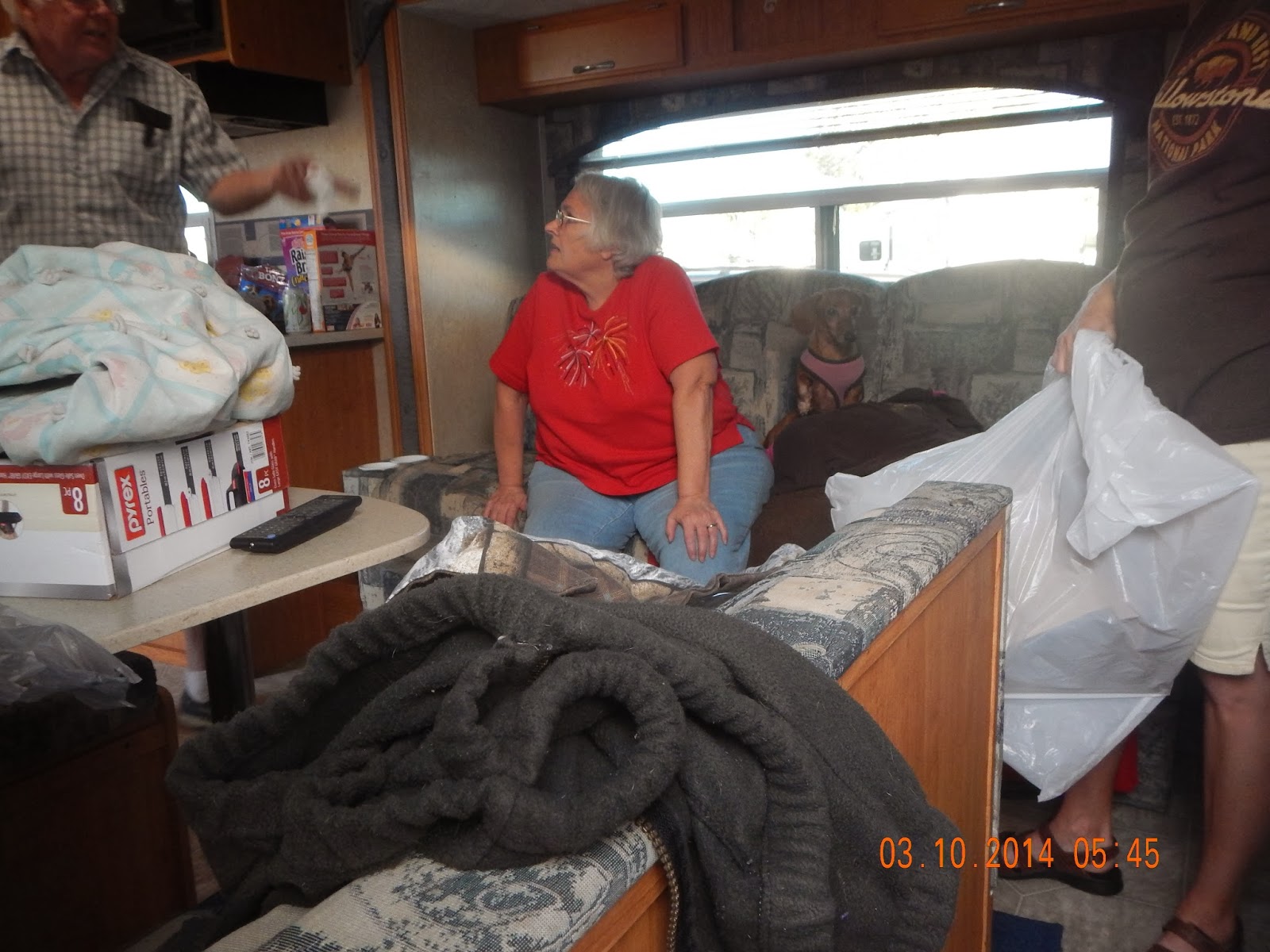 I think this must be deja vu. Didn't we just help Polly and Vern move into their new trailer?  The strange thing about all this was Polly and Vern called to tell us they bought a new fifth wheel and Jim and Sandie called a few hours later to tell us.  We're so happy for both of them. 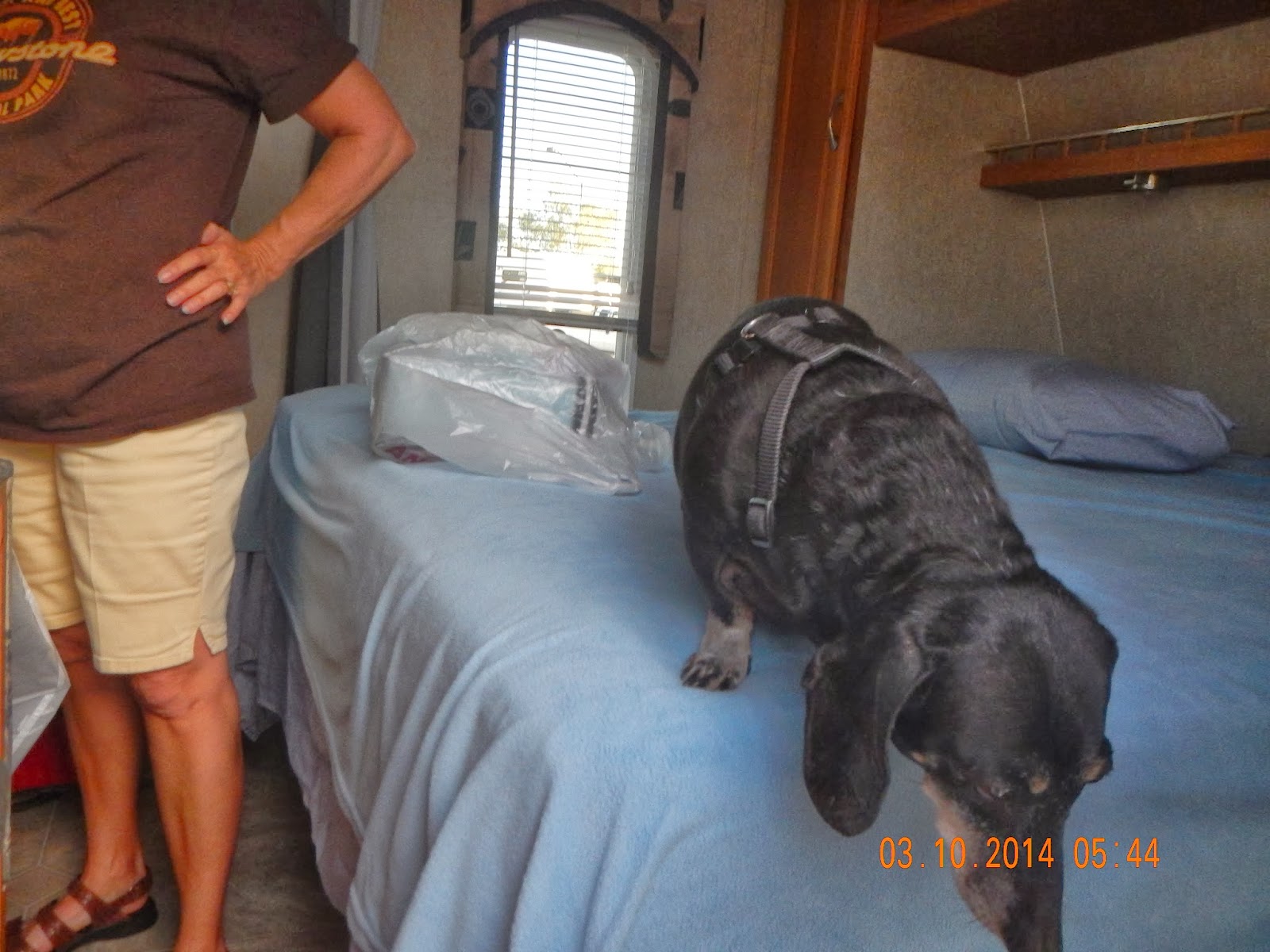 Scooter had no trouble figuring out how to climb up on the bed even though it is much higher than their doggie steps.

As always, we enjoy Jim and Sandie's company.  Jim of course is like a kid with a new toy.  He'll be tinkering with stuff for awhile.  The only bad thing about this is they won't be able to go to the Montana Owners Club Rally with us.

Posted by billandjanrvingtheusa.blogspot.com at 8:50 PM